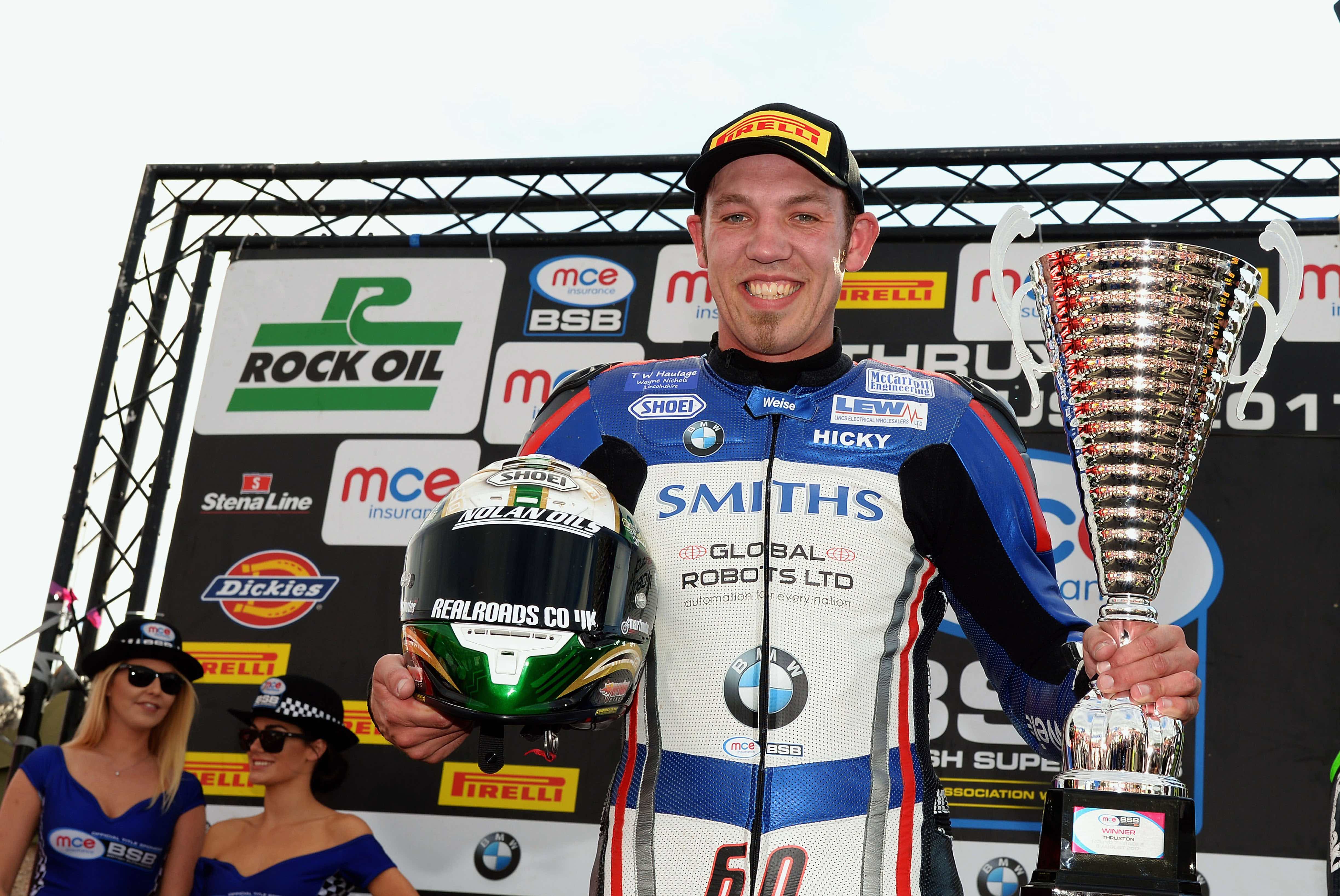 Peter Hickman gave them plenty to cheer about as he won the second race, the first ever BSB victory for the team. There was further joy too for team-mate Lee Jackson as he took his best finish of the year with an excellent seventh in race two.

Hickman had been quick throughout free practice on Friday and Saturday on the Smiths Racing BMW S1000RR and the Louth rider capitalised on his excellent form during qualifying yesterday afternoon when he recorded the third fastest time on his single Superpole lap, enabling him to start the first 18-lap race from the front row of the grid.

A good start saw him immediately move into second and from that moment on he disputed the lead with Josh Brookes, Jake Dixon and Shane Byrne. Hicky was never out of the top two positions and led from laps nine to 15 and although Brookes relegated him to second, he successfully held off the challenge of Dixon to deservedly claim his and the team’s first BSB podium of 2017.

The 30 year old started the second race from pole position, the first of his career, and was never outside of the top three all race. Leading from laps nine to 13, he had to give second best to Australian Brookes when he came by on lap 14 and it looked like he’d take his second runner-up spot of the day. However, Brookes dramatically crashed on the penultimate lap and Peter grabbed the opportunity with both hands to take his first win of the season and give Alan and Rebecca Smith their maiden BSB victory. The results also saw him leap up the championship table to third overall.

Team-mate Jackson was also in good form during practice but was disappointed to have lapped three tenths of a second slower in qualifying and only line up in 19th on the grid for the first encounter. Starting from the seventh row of the grid, the 21 year old from Lincoln dropped back to 20th in the early stages but in the second half of the race he steadily moved forward and his determined riding was rewarded with 14th place and two more hard-earned championship points.

His efforts saw him line up in 11th place for race two and by half race distance he moved up into the top ten for the first time. He was part of a big battle disputing sixth place and although Martin Jessopp claimed the position on the final lap, Lee was right in his wheel tracks in seventh for his best result of the 2017 season.

Peter Hickman: “I’m obviously delighted to have taken my first win and podiums of the season but even more delighted to give the Smiths team their first ever BSB win. It’s absolutely mega for all of us and although it’s a small, family-run team everyone works so hard and it’s brilliant for them to be rewarded for all their efforts. I felt comfortable out front in race one, although it’s never easy setting the pace but I was over the moon with second place. Race two followed a similar pattern and although Jake got by me at one stage, I could see his rear tyre was used more than mine so knew he wouldn’t be a problem although Josh was obviously more of a threat. It’s a shame he crashed out but that’s racing and hats off to my guys, they’ve got the bike set up so well which makes my life a lot easier. A first and second place means it’s been a brilliant day and third place overall now is the icing on the cake.”

Lee Jackson: “It’s been a bit of a mixed weekend at what’s normally one of my strongest tracks and I was a bit downhearted after qualifying. We had a good think about things on Saturday night and 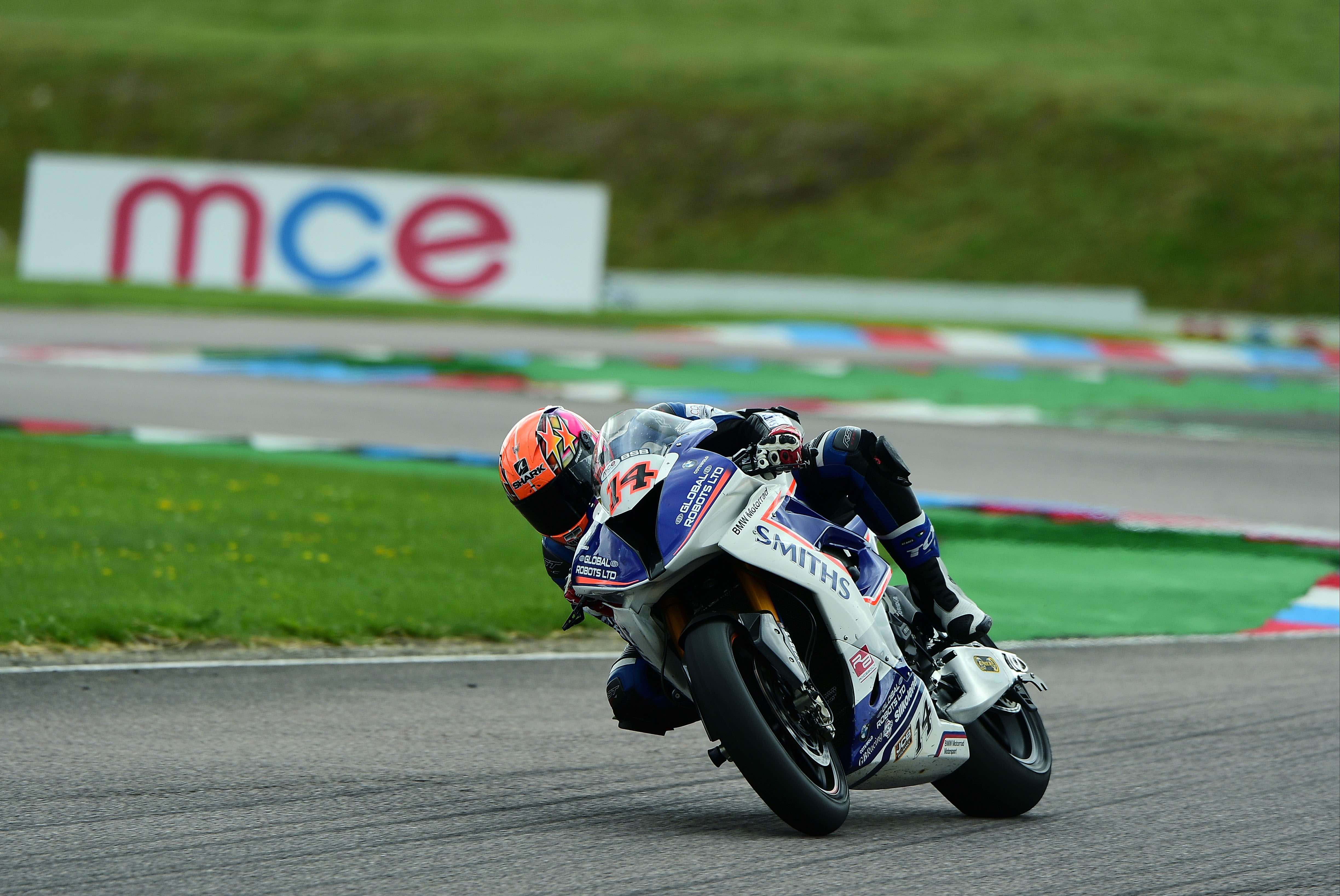 although 14th might not look great on paper, I was pleased to have fought my way through the pack from P19 on the grid. It meant I had a much better starting position for race two which is a huge help as you don’t get duffed up as much on the first lap! The team made some more changes to the bike and I was able to get my best finish of the year so I can’t thank the team enough. It’s my home round next so hopefully I’ll be able to put in a strong performance there too.”

Rebecca Smith, Team Manager: “I’m almost lost for words and I can’t thank everyone in the team enough. Pete’s on a fantastic run at the moment and been knocking on the door of results like today for some time now so it’s great to see it all finally come together. We always knew he was capable of it and it’s been a weekend of so many firsts – our first front row, our first pole position and our first win – so with some strong circuits coming up, hopefully it’s just the beginning. Hats off too to Lee, he never stops working and it’s great to see him rewarded today. We know what results he can achieve and with Cadwell next up, this should give him a lot of confidence going into his home round.”

Round seven of the MCE British Superbike Championship takes place at Cadwell Park over the weekend of 18/20 August and for further information, please visit www.smithsracing.co.uk and www.britishsuperbike.com.

Pictures courtesy of Jon Jessop Photography:  Peter Hickman celebrating on the podium and Lee Jackson (14) in action at Thruxton.